Award-winning innovation from Vert Technologies has joined other leading Scottish products in a wall of fame display at the First Minister’s office in the Scottish Parliament in Edinburgh.

Vert’s patented Conical Rotary Compressor (CRC) technology is one of just a dozen brands and devices featured under the “Flying Scotsman” banner. The display aims to highlight Scottish products with a global impact. 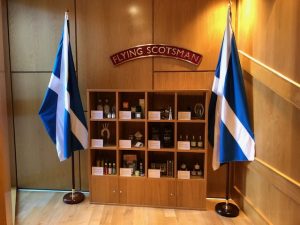 Vert was founded in Edinburgh in 2013 to develop its CRC technology, and now employs 14 people at its manufacturing and design centre on the southern edge of the city. It has won multiple awards since the first working prototype was produced in 2014, and led to the company securing a prestigious government grant in 2019 from the UK Department of Business, Energy and Industrial Strategy (BEIS).

Vert is currently accelerating commercial sales of its compressor units, powered by its patented CRC technology. Chief executive Phil Harris, who joined the company last year said: “It is an honour to sit among such prestigious company within the First Minister’s office.

“Some of these products have achieved what can truly be described as global recognition, and we aim to become the equivalent of that not only within the compressed air industry but in other sectors such as refrigeration, space and vacuum where our technology could provide important benefits. Previously thought unachieveable, our technology could revolutionise how machines are powered across a wide range of industries.”

Vert’s CRC technology is the power behind its A100 and the more recently-launched A150 air compressors, which achieve high levels of pressure with significantly reduced levels of noise and vibration, which is of direct benefit to the machine operator. This revolutionary design has been hailed as the most significant innovation in the compressed air industry of the past four decades.

Similar to traditional twin-screw devices, the Vert CRC uses a pair of rotors to generate pressure. Vert’s novel step is to place one inside the other, instead of side by side.

As air travels along the rotors, the volume of the chamber reduces, increasing the pressure. This increases the level of power at the discharge end.

Unlike most traditional compressors, Vert’s units have a 100% duty cycle, meaning they can run continuously if required. The compact design is also extremely portable, providing maximum flexibility to users.

For the latest Vert news follow our LinkedIn page

THE HERALD: Edinburgh manufacturing expert reckons we live in an ‘over-managed world’

THE SCOTSMAN: Change at top as Edinburgh’s Vert Rotors enters next phase

THE ENGINEER: How new technology could have a positive impact on hearing and wellbeing in the workplace